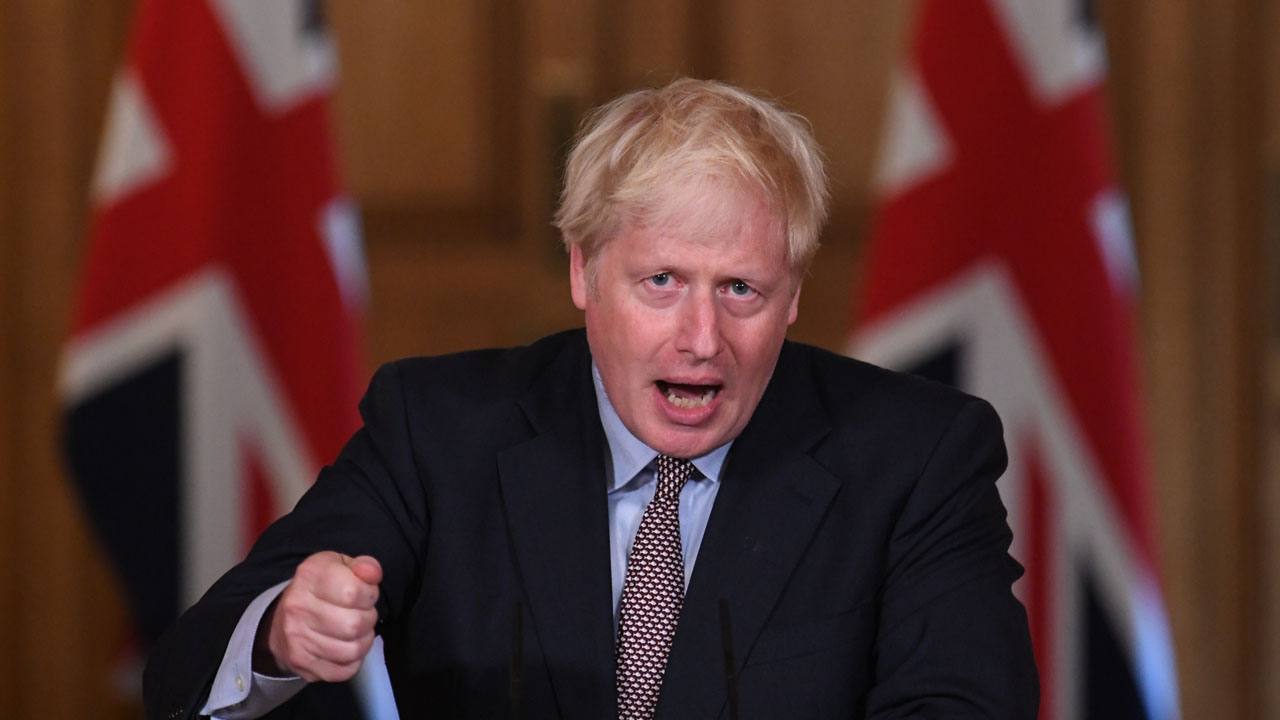 Britain’s Prime Minister Boris Johnson speaks during a virtual press conference at Downing Street in central London on September 9, 2020 following an announcement of further restrictions on social gatherings in England due to an uptick in cases of the novel coronavirus. – The UK government on on September 9 sets out tighter rules on social gatherings to curb the spread of the coronavirus, with concern mounting at rising infection rates among the young. The law in England will change from next week to reduce the number of people who can gather socially from 30 to six, with some exemptions. (Photo by Stefan Rousseau / POOL / AFP)

British Prime Minister Boris Johnson was to announce on Monday a major testing programme in areas with the highest coronavirus infection rates as the country re-enters a system of tiered restrictions.

The prime minister was set to announce in parliament that regions classed as very high risk would be able to bring in the army to help with mass testing as part of the government’s Covid Winter Plan.

This comes after the city of Liverpool this month held England’s first city-wide testing, which the government hailed as a success leading to a “substantial fall” in cases.

The city in northwest England is now set to trial a new system of testing where contacts of those who have tested positive can take a test every day for a week and only have to isolate if they test positive, instead of immediately quarantining.

If successful, this system could be used across the country’s state-run National Health Service (NHS), in care homes and by the whole population from January, Downing Street said.

It said new measures will also focus on care home residents, who are unable to have visitors indoors due to social distancing rules.

It said that a pilot programme to test visitors in 20 care homes could roll out nationwide next month, allowing residents to have physical contact with visitors.

Economic impact
England is to return to a system of tiered anti-coronavirus restrictions after the latest lockdown ends on December 2.

Downing Street has said these will be similar to the system in place before the lockdown but more restrictive in some areas.

Britain has seen more than 55,000 deaths from some 1.5 million cases — one of the worst rates in the world — and has been grappling to control a second spike of infections.

Health Secretary Matt Hancock told BBC radio on Monday that “the top tier is going to have to be tougher than the previous top tier”.

“We need to make sure we bring the virus down, not just flatten it,” he said.

Johnson, under pressure because of the economic impact of the outbreak, was also due to announce Monday how rules will be relaxed for Christmas to allow family gatherings.

It comes after British drugs group AstraZeneca and the University of Oxford on Monday said they would seek approval for their jointly-developed vaccine against Covid-19.

“We can see with some confidence that this about getting through this winter and getting the vaccine programme rolled out,” Hancock said of the latest measures.