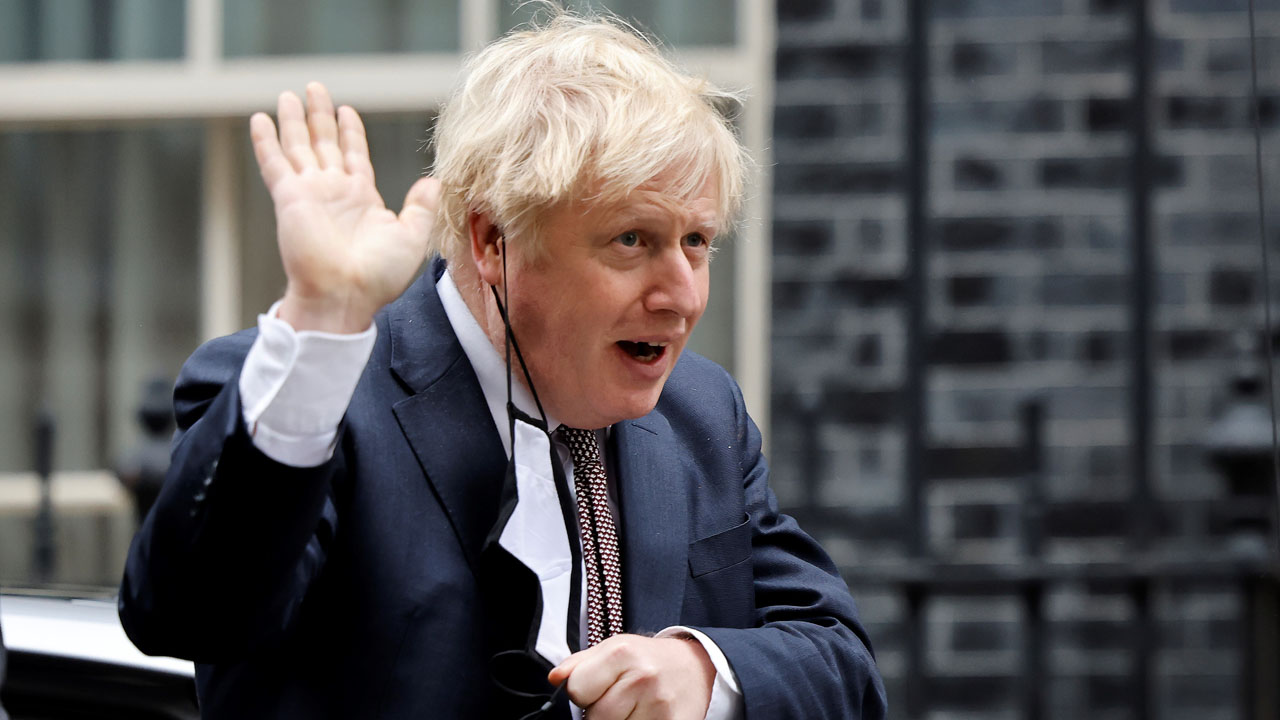 Britain’s Prime Minister Boris Johnson reacts as he removes his face covering, worn due to the COVID-19 pandemic, after arriving back at 10 Downing Street in central London on November 26, 2020. – Britain’s government on Wednesday unveiled plans to slash the foreign aid budget to help mend its coronavirus-battered finances, prompting one minister to quit and defying impassioned calls to protect the world’s poorest people. (Photo by Tolga Akmen / AFP)

Britain on Thursday defended swingeing cuts planned to its overseas aid budget after an outpouring of protests that it marks a life-threatening retreat on the government’s ambitions to play a global role after Brexit.

But critics pointed out that the Treasury was releasing billions elsewhere for other priorities, including military spending, even as it pleads pandemic poverty in the budget overall.

One junior minister in the Foreign Office quit her post in protest.

Foreign Secretary Dominic Raab insisted the cut was temporary given the economic crisis brought on by Covid-19 and vowed no retreat in UK leadership across aid priorities such as girls’ education, famine relief and preventive health programmes.

The sum lost for aid is roughly £4 billion ($5.3 billion) from a £15 billion budget — the same awarded to a new development fund for the north of England, where Johnson’s Conservatives won seats at last year’s election on a promise to “get Brexit done.”

Mark Sheard, chief executive of the aid group World Vision UK, said the government’s spending priorities would come at “the cost of lives” just as it prepares to take over the G7 presidency and host global summits on climate change and education next year.

“The UK’s commitment to ending poverty worldwide has always been something of which we could be rightly proud, but just when global leadership is most needed we are stepping back,” he said.

By cutting aid, the government had “relinquished its right to talk about ‘Global Britain’ leading the world”, he added.

However, Raab underlined British goals for the G7 and COP26 climate summit, and said 2021 would be “a year of leadership for Global Britain as a force for good around the world”.

China, Russia and ‘vacuums’
Criticism has come too from religious leaders including Archbishop of Canterbury Justin Welby, the leader of the worldwide Anglican church, who called it “shameful and wrong”, as well as five former prime ministers.

Most pertinently for Johnson ahead of a parliamentary vote to amend the aid target, several Conservatives have broken ranks to join opposition parties in vowing to oppose it, pointing out that the UK risks falling foul of Joe Biden’s incoming US presidency.

“As president-elect Biden commits to a new era of Western leadership, here we are about to mark the start of our G7 presidency by cutting our overseas aid budget,” Tobias Ellwood, chairman of the House of Commons defence committee, told parliament.

“Downgrading our soft power programmes will leave vacuums in some of the poorest parts of the world that will further poverty and instability,” the Conservative MP said.

“It is likely to see China and Russia extending their authoritarian influence by taking our place.”

Former international development secretary Andrew Mitchell said the reduction would be “the cause of 100,000 preventable deaths, mainly among children”.

The government says it is not rowing back on global commitments as it starts a new chapter outside the European Union, pointing in part to its involvement in research and future not-for-profit distribution of a vaccine against Covid-19.

The aid budget will remain at a hefty £10 billion, ranking highly in the G7 club of rich nations, officials said.

Finance minister Rishi Sunak told Sky News that Britain was facing an “economic emergency” because of the pandemic.

“I don’t think anyone could characterise our level of support for the poorest countries as turning our back,” he added.